Dainty mix of 4mm Green Aventurine, Tiger's Eye and sparkly Swarovski 'peridot' bicones highlighted with tiny round beads of gold vermeil.
The green Aventurine are a semi-translucent mix of polished and frosted beads in a light sage green colour, and the Tiger's Eye beads are golden-brown with lovely chatoyancy.
The Swarovski 'peridot' crystals and the tiny gold vermeil add an extra touch of sparkle and shine.

Your bracelet will be wrapped in tissue and presented in a small organza gift bag.

The birthstone of August and Leo is peridot, represented here by Swarovski crystals of the same colour.
Tiger's eye is a semi-precious alternative birthstone for August and Leo.
It is also a popular choice as a sacral chakra stone.
Tigers eye was worn by Roman soldiers, who believed it brought alertness, clarity and protection in battle.
It is considered a stone that enhances self-confidence and courage and vitality.
1/2/22 marked the start of the Chinese New Year - the Year of the Tiger.
Other "tigers" include 1926, 1938, 1950, 1962, 1974, 1986, 1998, 2010.

Green Aventurine, like most green stones, is thought to bring inner peace, tranquility and enhance self-esteem.
It is sometimes called the the Stone of Luck, or the Gambler's stone, as it is believed that carrying a piece of Aventurine in the left pocket will attract wealth and good fortune. 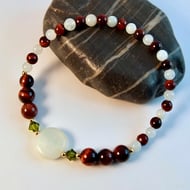 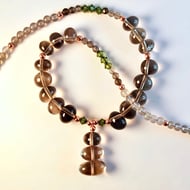 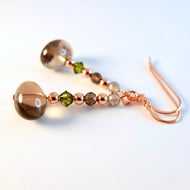 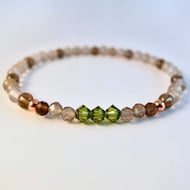