Quotation Greetings Card "Just a dip and a bob"

This square card is hinged at the left-hand side and protected by a cellophane wrapper.

Blank inside for your own greeting, with a small copy of the image and descriptive text on the back of the card.

This card features an illustration of a Pied Wagtail perching on a rock in the middle of a burn (stream), which appears in the first book in the Adventures of Algy series, "A Surprisingly Fluffy Bird", and it includes a quotation from the book on the front of the card.

Reproduced from an original illustration by Jenny Chapman, © 2015.

Welcome to my Folksy shop, Jenny Chapman Artwork. If you are viewing an item page, click the shop link in the small box to the right of the main image to go to the shop front.

I try to despatch within 24 hours, and send all UK orders by Royal Mail, but please be aware that postal services may be disrupted by strikes in autumn 2022.

Pied wagtails are endearing, pert little birds, and from spring to autumn we frequently see them bobbing about not only in the garden but on the beach and on the rocks in the burns (streams) which flow down to the sea.

This illustration was created from observation and photos of a particular wagtail perching on a rock in the middle of a burn very close to the point where it runs out across the sand, into the waters of Sanna Bay. It became the inspiration for a character in "A Surprisingly Fluffy Bird" and the burn, which often looks bright blue in good weather, became the Blue Burn. A bright and cheeky character, the wagtail in the book often remarks "Just a dip and a bob", while wagging its tail up and down energetically.

The original illustration from which this card is reproduced was created with Winsor and Newton professional watercolour paints and watercolour sticks, and Faber-Castell Albrecht Durer watercolour pencils on Fabriano Artistico HP watercolour paper.

This item will be posted to you by Jenny Chapman Artwork within 3 days of receiving payment. 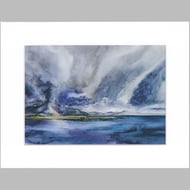 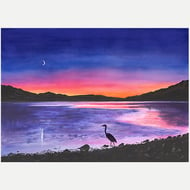 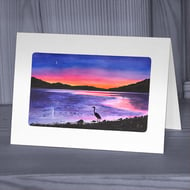 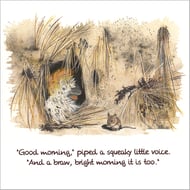